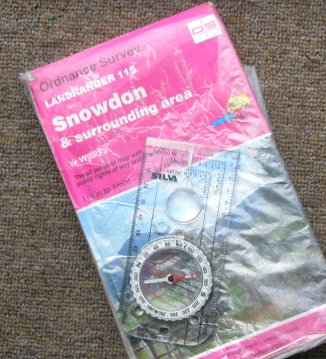 There are no right or wrong ways of tackling the Fourteen Threes, and any number of variations or permutations are possible. Starting from the South on Snowdon has the advantage of finishing on the easier terrain of the Carneddau when fatigue is beginning to take its toll.

On the other hand, starting from the North is an advantage if setting out in the dark; and the descent down the Llanberis path at the end is more straightforward than any of the options off Foel Fras. Of these northern descents, that from the bwlch between Foel Fras and Drum down to Llyn Anafon is probably shorter and easier than going over Drum to Bwlch y Ddeufaen.

Other reasonable options are to descend from the summit of Foel Fras south-east towards the Afon Dulyn to pick up tracks leading either to Pen y Gaer or the Llyn Eigiau car park. However, without someone to meet you at the road-end all these descents become long and wearisome if pursued all the way to a main road.

One popular, if knee-wrenching, variant is to start directly up Crib Goch and then, having traversed Crib y Ddysgl to Yr Wyddfa, descend the Llanberis path as far as Clogwyn station and then plunge down Cwm Hetiau. This is very steep at the top and best entered by a traverse right to left looking down, starting where the path goes under the railway line.

Another possibility which avoids the long stretch of tarmac down to Nant Peris, is to descend the normal East ridge of Crib Goch to Pen y Pass,(traversing the Horns beyond Bwlch y Moch to be really traditional), take the little path through the garden on the left of the Youth Hostel to Llyn Cwm Ffynnon and pick up the Miners' path coming from the Pen y Gwryd hotel which leads to Bwlch Tryfan. A quick up and down the south ridge of Tryfan enables the Glyderau and Y Garn to be traversed in reverse. Elidir Fawr entails another dog-leg out and back , but dropping down to Cwm Cywion from Foel Goch is a very rapid and pleasant way down to Ogwen Cottage.
The quickest way up onto the Carneddau from Ogwen is undoubtedly the direct route straight up , but the East ridge skirting Cwm Lloer can be easier for tired legs.The same applies coming down. Steep descents take just as much out of the legs as going up…..  Coming off Tryfan, the bouldery West flank followed by the steep North-facing gully that comes out near  the Milestone Butress is the fastest route, but continuing the line of the West flank path under Bochlwyd and down to Ogwen may be equally efficient, when combined with the direct ascent of Pen yr Olau Wen. Horses for courses, as they say….

Yr Elen is best reached by traversing across the flank of Carnedd Llewelyn to join the Yr Elen-Llewelyn path near the bwlch, rather than climbing Llewelyn first and losing height. Apart from that, nearly all the possible ways of doing the Fourteen Threes are on well- trodden paths. The only other exceptions are the ways down Cwm Glas which are all steep and awkward and best checked out beforehand. Only that which roughly follows the outflow stream from Llyn Bach is well – defined and it is not exactly pleasant.